As the war continued it became apparent that the simple combat badge was no longer adequate for the growing number of veterans with years of experience and in June 1943, four new decoration classes were introduced: 25, 50, 75 and 100. These new badges consisted of a similar design to the previous one, but with a plaque showing the Arabic number of the class at the base of the crown. The dimensions were slightly larger for the 25 and 50 type while the 75 and 100 were even larger. The crown in the case of 25 and 50 was silver, while in the class 75 and 100 it was gilded. The center of the coat of arms consisted of a panzer wedged and separated and chemically obscured in the case of the classes 25 and 50, while in the classes 75 and 100 the wagon was silver.

The criteria for the assignment, which will be modified during the war along with the electors, in 1940 were: 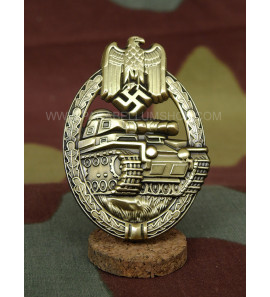